I thought I was through with the coaching thread, but I’ve been doing a lot of coaching this month, so I’m going to continue for a while. Plus I’ve joined ISTE’s ETcoaches in a slow Twitter Chat (#ETCoaches) and book study about coaching. There’s still time to join in.

I take an eclectic approach to coaching. I use the best from what I’ve read, workshops I’ve attended, and from working with some great colleagues. All of this morphs into my own approach to coaching, but even that’s not final. I keep learning new things, especially from the coaches I work with, and so I keep tweaking and hopefully improve the approach I take. One piece I’ve been working on recently is providing a visual scaffold to support a coaching conversation. This winter I developed a Coaching Conversation Placemat that some of my coaches have been experimenting with. They and some colleagues are also giving me feedback on the tool, and I’d be glad for any additional ideas. 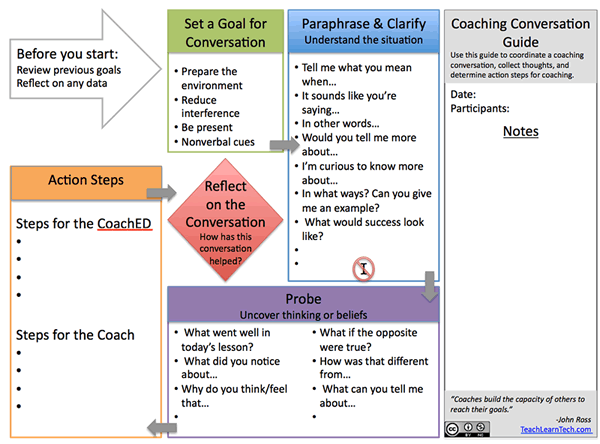 A Road Map for Conversation

A roadmap is a guide. It provides options. It doesn’t suggest you have to take the same route every time to get where you want to go. You might hang out along the way and see some new things, or zoom right through parts to save time, but in the end you want to reach your destination. I give my coaches different handouts and guidelines for supporting their conversations, but I wanted one that matches my approach.

Currently, I suggest coaching conversations be fairly focused in scope and explicit in terms of outcomes. But those outcomes are determined at the onset of each conversation. For me, coaches begin by determining a goal for the conversation with their colleague and take explicit steps to move towards some tangible action steps each can take following the conversation. This conversation is influenced by the different types of conversations common to cognitive coaching, but throws in a few other ideas, as well. One of the greatest benefits of having a structure is that it helps to address one of the major challenges teachers face, and that’s a lack of time. Keeping focus saves you time.

The focus of this type of coaching conversation is reflection–allowing educators to reflect on their practice in a safe environment with a non-judgmental peer. Holding back judgment and not jumping to a “quick fix” is a critical part of the conversation. In fact, this type of conversation may be one of the only times that master teachers have an opportunity to truly reflect on their practice rather than struggling to find time to learn some new strategy or resource. Many teachers tell me reflection is valuable, but they don’t often have time to do it. This held true this past week.

Putting the Placemat into Practice

It can be difficult to coach a strong, veteran teacher. In fact, one of the teachers this week commented at the beginning, “I’m not really sure why I need to be coached.” But through the conversation with her friend and newly appointed coach, she reported the conversation was extremely helpful. All of our volunteer teachers commented on how helpful it was to take time to reflect on what was going well and working on their own goals rather than having an evaluative conversation that often takes a deficit approach.

Having a goal for the conversation helped teachers to focus their reflection and comments. When asked to describe their goals, these veteran teachers often had a lot of ideas. They had ideas of how they’d like their lessons to unfold and shared several different strategies and resources they’d like to try to get there–sometimes many different resources. Having a coach keep the conversation focused helped these teachers cut through some of the noise in their thinking and have a deeper conversation about the most important aspects of their goal, again, making the most of their brief time together. It also allowed the pair to determine if there were any underlying factors that might influence the teacher’s motivation or thinking (see last week’s entry on first- and second-order barriers for more on this topic).

This conversation is not about learning a new resource or strategy. That’s a different type of conversation and any skill-building training, exploration, or collaborating on a lesson can occur later as an action step after this conversation. The coach goes into the coaching conversation without any preconceived ideas of potential outcomes, because the first idea may not be the best idea. The coaching conversation helps to determine the educator’s specific goals prior to seeking out any particular strategy, approach, or technology to use. Too often, we present resources first–especially technology resources–and then teachers have to figure out how to use them. And since being back in the classroom can be so hectic with little time to practice, new resources often just don’t get used. Having coaching conversations first saves teachers time and effort as resource selection is more goal-oriented and practical.

Feel free to download the Coaching Conversation Placemat (PowerPoint or Google Doc) and use it or modify it for your coaching needs. I’m especially open to suggestions on how to improve it. (I’m working on a more linear representation for some of my coaches thanks to their feedback.) I created this at the end of December, but it has been tweaked after being reviewed by some of my coaching colleagues and my new coaches. Please let me know if you use it, if it’s helpful, and how you’ve changed it to make it better. 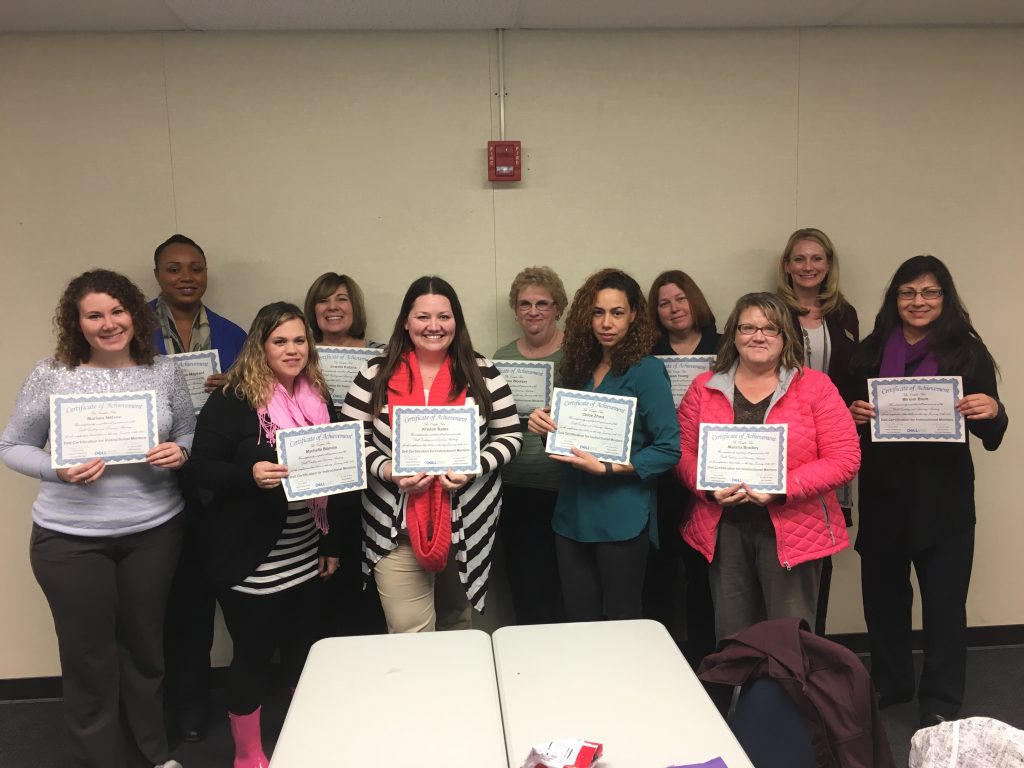 Congratulations to the second round of Dell-Certified Mentors from Moreno Valley USD, CA!